Globalvia / Blog / Mobility / Our concessions in Madrid, deal with the heavy snow!

15 January, 2021
Mobility
Our concessions in Madrid, deal with the heavy snow!

48 of our operators completed a four-day marathon to keep our three highway concessions in Madrid clear of snow. Six snow plow trucks with their own salt shakers and blades, 7 support vehicles and 198 tons of salt have been used for this.

The professionals in charge of the maintenance of our three toll roads in Madrid completed four uninterrupted working days between last Saturday and Tuesday to keep them open to traffic and solve incidents. In addition, they provided assistance of all kinds, including the transfer of a future father to the hospital so he could accompany his wife during the delivery and the opening of a path so that another woman could give birth at the Puerta de Hierro Hospital in Majadahonda, after being transferred in ambulance 33 kilometers from Quijorna. 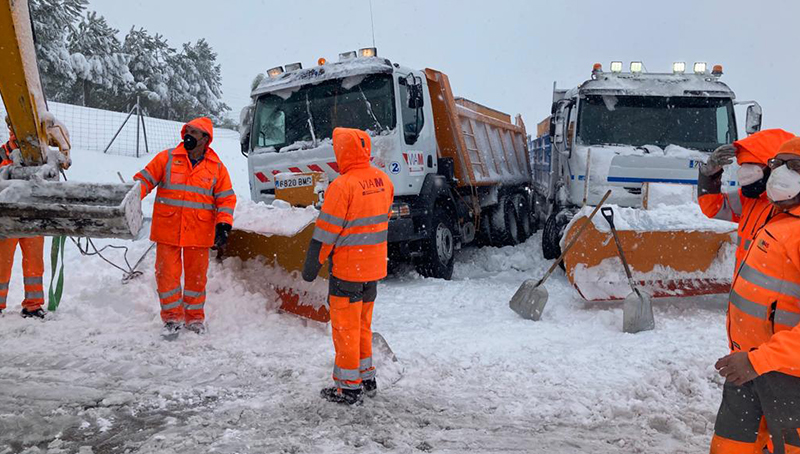 During the four days of greatest virulence of the storm, an operation of at least 48 professionals was maintained. Most of them doubled their shifts until a home collection service for their relays could be organized and they could be transferred to the concessions. Between Friday and Sunday, most of the teams rested in their own facilities in shifts of just two hours.

In the early hours of Friday 8th to Saturday 9th January, section I of the M-45 was the most affected by the snowfall. Three snow plows, two surveillance vans and two support vehicles entered service. At kilometer 27, several vehicles were detained after a truck had crossed the road. The clearing of this road and the transfer of the trapped vehicles took four hours. Three people were detained for a day and a half at that kilometer point because they did not have chains. They were offered to be taken to the concession’s operating center, but preferred to stay in the vehicle, where they were supplied with broth and sandwiches. 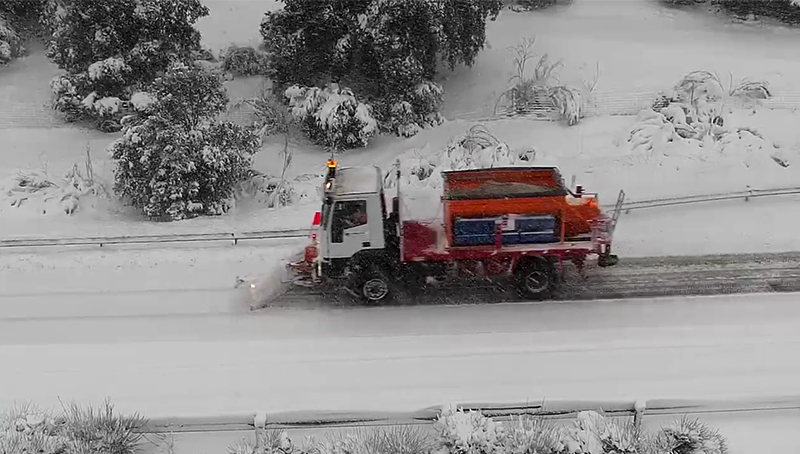 On the M-501 the biggest problems were concentrated on Friday night. The crossing of a bus caused a traffic jam, making it difficult for the two operating snow plows to access. At the Boadilla access, the operators had to help car by car until the traffic was cleared. One of the vehicles was that of the fledgling father, who managed to reach Puerta de Hierro Hospital and accompany his wife during the delivery.

From this hospital they thanked our control center for the support provided and the good conditions in which the connection to their facilities remained. They were key so that a woman could be transferred by ambulance from Quijorna and came to give birth to the aforementioned hospital. The teams took advantage of their trips to clear snow from the main branches of the highway.

On the M-407, an asset that we manage 50% with Sarrión, two snow plows were permanently working. At dawn from Friday to Saturday, those cars that were occasionally trapped by the storm were reinstated one by one, driving behind the snow plow to the Griñón roundabout. By early Sunday morning the highway was completely passable without chains.

Support was also given to third parties, specifically Moraleja de En medio, cleaning the main street up to the Arroyomolinos roundabout. It also collaborated with the snow removal machine on the M-413 road to Fuenlabrada, and several passes were made outside the concession section until reaching the M-50. 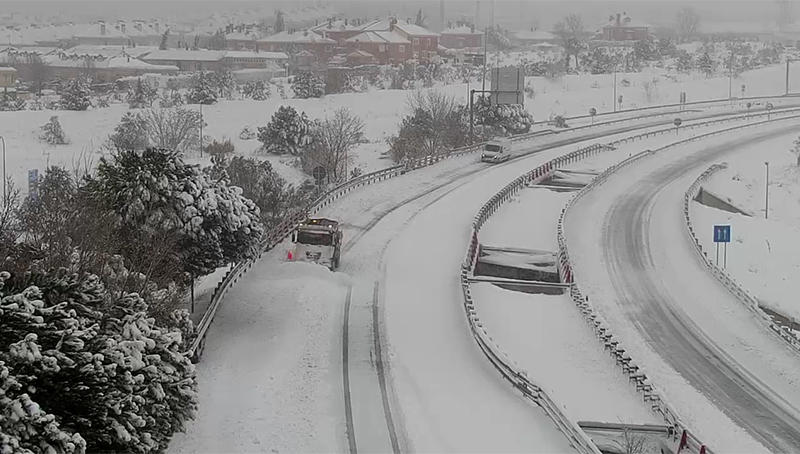 Thanks to the maintenance of the service, on the M-45 and M-501, the only sections in which there is daily data, during those four days 77,857 vehicles were able to transit. In addition, traffic has been recovering significantly day by day, especially among heavy vehicles. If on Saturday 9, the daily traffic of heavy vehicles on the M-45 was only 7% compared to the same day of the previous week, by Tuesday 12 the proportion had increased to 73%. On the M-501, on Tuesday the 12th, heavy vehicle traffic was 35%.

Progression of the transit from January 2 to 12.