8 May, 2019
Mobility | People
Globalvia participates in key events of the infrastructure sector held in Madrid

As a leading company in the transport infrastructure sector, Globalvia has a presence in the most important events and meetings with the aim of promoting dialogue and disseminating its business vision.

Javier Pérez Fortea, Globalvia’s CEO took part in the XI Meeting of the Infrastructure Sector on 9th April organized by ABC and Deloitte at the Madrid Casino.

Under the title “Current Situation and Perspectives of the Transport Infrastructures Sector” the event was headed up by the Minister of Public Works, José Luis Ábalos.

Javier Pérez Fortea took part on the discussion panel about the perspectives of the concessions sector and opportunities for public/private cooperation. Javier, and the rest of the directors who accompanied him on the panel, namely Juan Osuna from Aleatica, José Aljaro from Abertis and José Antonio Labarra from Roadis, gave their opinions about the financing of Spanish toll roads. In relation to this subject, Globalvia’s CEO said: “barriers on tolls roads should not be removed until the pay per use system is properly structured”, which is a claim made by SEOPAN and which the Government states it is studying.

During his speech, Javier Pérez Fortea also referred to the opening up of passenger railway transport, announcing that Globalvia is already negotiating alliances to enter the market. 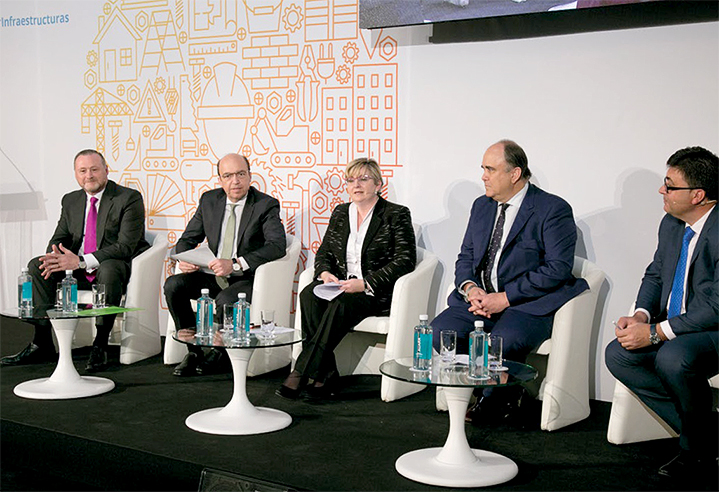 Intervention by Javier Pérez Fortea at the XI Meeting of the Infrastructure Sector.

Globalvia takes part at the XIX ITS Congress Spain

The XIX Spanish Congress on Intelligent Transport Systems was held on 1st, 2nd and 3rd April, organized by ITS Spain at the CentroCentro area in Madrid City Hall.

The rapid evolution of cooperative systems, the commitment to autonomous driving, the growing use of “Big Data”, the continuous improvement of public transport information system, the contribution of ITS to “Smart Cities” and the initiatives on Mobility as a Service (MaaS) are just some of the subjects on the agenda at the XIX Congress.

At this year’s edition Globalvia attended through members of the Corporate Innovation and Operations teams. On Tuesday 2nd April, Fernando Vallejo, IT, Innovation and Transformation Director, presided the panel on autonomous vehicles in which the companies GMV, IDOM, Tekia Ingenieros, ESYCSA – Grupo ETRA, CEIT, CTAG, INDRA and ASIMOB all took part. Through participation by all of them, the subject of autonomous vehicles was discussed from different points of view, thus achieving a very rich, varied panel in terms of contents. To quote Fernando: “The new mobility solutions increasingly cover a wider scope and require a more digitalized, smart infrastructure”.

Fernando Vallejo during his presentation at the XIX ITS Spain Congress.